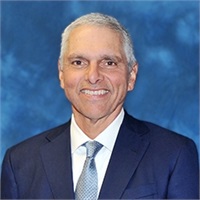 Jack D. Oujo has been involved in the financial, insurance and accounting industries since 1981. A Certified Public Accountant, Certified Financial Planner, Personal Financial Specialist and Certified Senior Advisor, Jack currently conducts his practice in Wall, New Jersey. For 25 consecutive years, he has earned the Avantax Top Producer Award and has been their #1 advisor in the nation for the last eight consecutive years.

He has been named to the Financial Times FT400 list as one of the top 400 advisors in the nation. In the Asbury Park Press Reader’s Choice Contest, Jack Oujo CPA, Inc. earned the “Best of the Best” award for Accountant/Accounting Firm. NJ Monthly Magazine has named him a 5 Star Wealth Manager for the last decade. Accounting Today Magazine has named him as a “Top Wealth Magnet” with Assets Under Management of over $400 million.

Jack attended Old Bridge High School and was inducted into their Wall of Fame in 2013. He graduated from Middlesex County College with an Associate’s degree in Accounting, Seton Hall University with a Bachelor’s degree in Accounting and he went on to earn a Master’s degree in Taxation from Fairleigh Dickinson University. He officiated his way through college, paying 100% of the expenses on his own.

His areas of business focus are in retirement, estate, investment and tax planning for his clientele of business owners, MLB umpires, physicians, executives and retirees. Prior to his financial services affiliation, Jack had a successful career as a professional baseball umpire reaching the Class AAA level. He won the Joe Ryan Award as the highest rated umpiring prospect in the minor leagues in 1985.

As part of his community service activities, Jack has run a FREE youth umpire clinic every February for the last twenty years and has been treasurer of the Spring Lake Chamber of Commerce. As a Coach and Board Member of the Brick American Little League, he helped lead the 14 year old All Stars to the only State Championship in the 45-year history of the league in 2005. He also coached the State runner-up team in 2010 with a different group of players.  Jack was President of the NJ/NY Chapter of the College Baseball Umpires Association (CBUA). He was the Freshman Baseball Coach at St. Rose High School in Belmar, NJ for several years and has made significant donations to that program. Jack is a member of the American Institute of Certified Public Accountants, NJ Society of Certified Public Accountants, and the Institute of Certified Financial Planners. In his leisure, Jack has gained an addiction to golf after retiring from baseball. He played in the United States over 30 Baseball League and Men’s Senior Baseball League (MSBL) for 19 years winning many Division Titles and playing in multiple All-Star games.

He has been married to his wife Eileen since 1986 and they have three children. They live in Sea Girt, NJ and Fort Lauderdale, FL.

His daughter, Kaitlin, is a Foreign Affairs Specialist at the National Nuclear Security Administration (NNSA) which is part of the Department of Energy. She has an undergraduate degree from The George Washington University and her graduate degree is from the Columbia University School of International and Public Affairs.

His son, Christopher, attended Embry-Riddle University and at one time was the youngest commercial airline pilot in the country when he was hired by American Eagle at the age of 21. He is currently a First Officer with Alaska Airlines.

His son, Matthew, earned his Bachelor’s degree in Finance from Florida Atlantic University in Boca Raton, Florida. He was a catcher on their Nationally ranked baseball team after winning All-Division honors while attending St. Rose High School in Belmar, New Jersey. He is a member of the Phi Delta Theta fraternity. He joined the firm in 2018 after his graduation and plans on pursuing an advanced degree and gaining Professional credentials and licenses.

*Investment and financial planning services are offered by Jack Oujo through his affiliation with Avantax.

We've built a handy mobile app that allows you to ask us questions on-the-go and to receive helpful notifications from us.